Should you ever twist the facts? 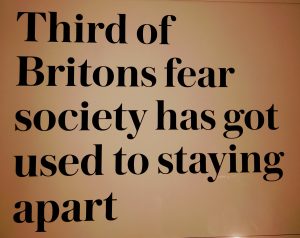 Should you let your agenda influence how you present the facts?

Slightly longer answer: Check out the headline in the main photo and the opening paragraph in the second. The clearly intended ‘shock’ element of this story is that the British public has become accustomed to distance and things will never be the same again. Sounds depressing…

A third of Britons, says the headline and intro (which is often as far as most readers will get). But wait, what about the other two thirds? How the majority feel is pretty important, no? If a third of people voted for a political party wouldn’t that mean that two thirds of the country backed somebody else?

Of course, that’s precisely what happens in the UK: parties gain power with only 34 per cent of the country’s voters supporting them, the rest of the population have to put up with being governed by someone they didn’t vote for. Likewise, we keep hearing how the 48 per cent who voted against Brexit should have their feelings taken into account and that the other 52 per cent cannot simply disregard them.

The problem is that while the Brexit vote was pretty close to 50-50, what the journalist is reporting on here is a split of 33.3 to 66.6.

Oh, hang on, there’s a paragraph further on that tells us what the others thought. Great!

It reads like this: “A third of Britons fear that we have become accustomed to staying apart; a third think things will go back to how they were; and a final third are optimistic we will be keener than ever to connect with each other.”

In other words, the same amount thinks one thing as the number who thinks the polar opposite. Singling one of these out for a headline does suggest some element of bias. If Labour won 33.3 per cent of the vote, the Conservatives the same and the Liberal Democrats the same, would one newspaper declare Labour the winner while another said it was one of the other two parties? They would if they were biased and twisted the facts to reflect their own agenda.

The moral of the story? As a journalist, report the facts and only the facts. Write a headline that says: “British public split three ways over long-term effect of the pandemic on behaviour”. That’s far more honest. If you come down on one side, the reader will notice this and distrust your message. If you lose the reader’s faith in what you are telling them, you have failed.