Subway shows how easy it is to upset the customer

You would think that no business would want to put in place a policy that virtually guaranteed it would upset its customers. And yet, that is precisely what Subway appears to have done.

For my sins, I have been a regular visitor to Subway stores for many years. I have accumulated many thousands of points on my Subcard and enjoyed many free subs as a result. Thank you, Subway! Just like the Nectar points system operated via Sainsbury’s, I am rewarded for my loyalty. In the case of Sainsbury’s, I usually accumulate enough points to pay for my ‘big Christmas shop’ without having to hand over any cash. Brilliant. It’s one of the main reasons that I shop at Sainsbury’s and nowhere else.

Likewise, while Pizza Express may arguably offer better quality food, I have always preferred to take my kids to Pizza Hut (and go on my own as well, if I’m honest) when the all-you-can-eat buffet is on. For less than a tenner each, we can eat what we want in whatever quantities we want (including salad) and have bottomless refills so that we are not paying nearly £2.00 for every glass of Pepsi Max, which would easily add another £20 on to the bill. Value for money, choice and putting the customer in control are key factors that put Pizza Hut above its competitors, in my opinion.

In the same way, when I first discovered Subway, it was a revelation. You chose your bread, the size of sub, the contents, the type of cheese, and which salad you wanted (you could have endless amounts of the green stuff, plus olives and gherkins and peppers etc etc). You could also have endless top-ups from the drinks machine. Excellent. My kids and I have always loved it.

But something has changed over recent months. I stopped going to my regular Subway, where they knew me so well that they always remembered my order, because they introduced a smaller scoop for the tuna. Honestly. They had decided that the large scoop previously used meant that customers were getting too much tuna for their money. I was told that if I wanted the same amount of tuna that I’d been getting for years before, I would now have to pay extra. On a couple of occasions I did, because the small scoops were pathetic. But after that, I stopped going. I found another branch of Subway where they still used the normal-sized scoop.

Just recently, I have been visiting a brand new Subway that has opened at a much more convenient location for me. I’ve been there several times with my kids and everything seemed fine. They were getting to know us and already knew what cookies we liked.

Admittedly, I found myself having to keep asking for more salad after the ‘sandwich artist’ put about four spinach leaves on, but I assumed that was because they were new. But it was only when my son noticed his chicken tikka being weighed out on scales that the alarm bells rang. The manager explained that she had been told to weigh everything and it was doing her head in. I joked: “Well at least you don’t have to weigh the tuna!!” to which she replied: “Oh no, we’ve got a smaller scoop for that.” <sound of hand smacking on head>

So, this is clearly a deliberate Subway policy – cut down on the portions that you give customers. I suppose it could be part of some right-on anti-obesity policy, where customers can no longer be trusted to decide for themselves how much they wanted to eat, but giving away calorie-packed cookies as part of a ‘meal deal’ blows that theory out of the water (especially since one store was giving cookies and crisps on each meal deal order). You are also encouraged all the time by the pricing to go for a footlong, rather than a 6”. 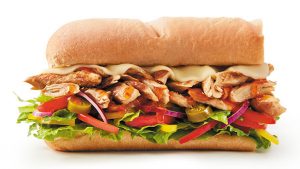 At the same time, this looks much more like a policy that the company has implemented rather than individual franchises because more than one franchise is doing it. Of course, one person can own several franchises, so they could have decided to cut down on portion sizes (aka short-change the customer) across their various branches without head office being aware. I suppose I would only know if this was the case if I went to a Subway that was out of the area.

But it doesn’t really matter. Whether the order has come from on-high – the manager said: “Everyone has suffered from the pandemic and we have been told that we now have to weigh everything” – or from the franchise owner, the end result is obvious. The customer (who has also suffered from the pandemic, by the way) is not impressed. I’m now seriously wondering, when we do get around to eating in Subway stores again, might we expect the ‘free refills’ to be limited as well, or maybe even no longer available? You have to ask what other corners might the company cut in order to make up for lost revenue?

I’m aware of what it takes to set up a franchise. It is a massive undertaking and there is a lot of money involved. But why go into business to make money where the ethos is to give customers what they want… and then reduce the amount you give them because you’re not making enough money? That would be like The Word Factory being renowned for offering 12 press releases for x amount and then telling customers that they will now only get 10 for the same price. And if they ask why we are giving them less for their money our reply would be: “This pandemic has been tough on us, you know. Sorry about that.” It would come as no surprise to us at all if those customers then chose to walk away. The last year has been tough on everybody – Lord knows we have seen our revenues come down considerably – but taking it out on the customer is not the answer.

Sadly, the whole exercise leaves a nasty taste in the mouth… which is certainly not what we are used to with Subway.

Even the biggest names can get it wrong